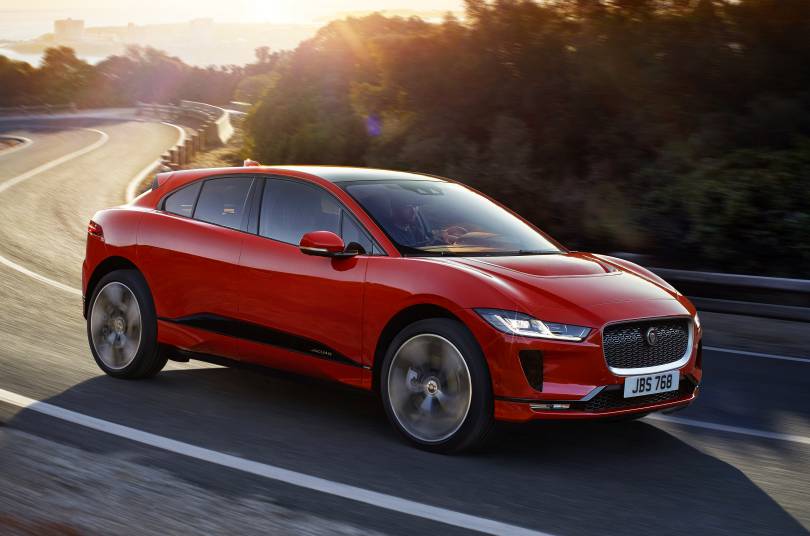 The new Jaguar I-Pace is the British firm’s first electric car, promising 0-60mph in 4.5sec and a near-300-mile range between charges. It’s also the first challenger to Tesla’s dominance of the luxury electric car market

It all started 20 years ago when Apple introduced the first iMac and not only saved itself from bankruptcy but became a brand others desperately wanted to be like. Since then, the letter ‘i’ has been used on everything from newspapers to teddy bears in the hope that some of the magic will rub off. However, the new Jaguar I-Pace is unusual in that it actually feels like a product Apple might have come up with itself.

As an electric car and an SUV, it’s right on trend, blending two sectors of the car market that are growing fast. But just as importantly, Jaguar hasn’t played safe and simply stuffed an F-Pace with batteries; instead, it has created a car that remains faithful to the dramatic I-Pace concept that it showed at the 2016 Los Angeles motor show and, as a result, something that looks like nothing currently on the road.

True, Jaguar isn’t the first brand to build an electric SUV, having been beaten by Tesla and its Model X, but that’s a much bigger car with a starting price north of £90,000, whereas the I-Pace is available for a little under £60,000.

Power for the I-Pace comes from two electric motors, with one at the front and the other the rear, to make it four-wheel drive. Together, these motors produce 395bhp, which is enough to get the car from 0-60mph in 4.5sec – slower than the range-topping Model X P100D, but significantly faster than the majority of family-friendly cars, electric or otherwise.

Similarly, the 298 miles that the I-Pace is said to be capable of on a single charge surpasses the ranges of most electric cars, even if it falls short of the 351 miles of the Model X. And it’s worth bearing in mind that, unlike existing electric models, the I-Pace has been tested on the new WLTP cycle, which is intended to better reflect real-world driving conditions; it would have managed 336 miles on the old cycle.

Recharging the batteries from 0-80% capacity from a standard wall box – as you might when plugging in overnight – takes 10 hours, while one of the current generation of public rapid chargers would reduce that to 85 minutes. The I-Pace is also compatible with 100kW chargers, which are capable of giving it an 80% charge in 45 minutes, although few of these will be installed in the UK before the end of 2018.

To help you extract the maximum possible range on a single charge, there’s the option to increase the regenerative braking effect, where the energy that is usually lost when you lift off the accelerator is instead used to put some charge back into the batteries. The side effect is that the car slows more noticeably; indeed, Jaguar claims that it allows you to drive the I-Pace in stop-start traffic without touching the brake pedal at all.

We won’t get to drive the I-Pace until the spring, but it has a low centre of gravity and a 50/50 weight distribution, thanks to its batteries being positioned beneath the floor and between the wheels. This should be good news for handling, although the I-Pace is a heavy car, weighing in at more than 2.1 tonnes.

The interior of the production I-Pace isn’t as close to the concept’s as the exterior, but it combines many of the same elements with the infotainment interface from the recently launched Range Rover Velar, so there’s still plenty of wow factor.

A large touchscreen sits in the centre of the dashboard, giving you access to satellite navigation, stereo and phone functions. Plus, the lower centre console is also touch-sensitive and is used to control secondary systems, such as the air conditioning and driving modes.

The downside of touch-sensitive panels of this sort is that they tend to be distracting to use on the move, because they force you to take your eyes off the road. However, the I-Pace’s are complemented by two rotary dials that can be operated by feel and that change function depending on the menu you’ve selected.

A third digital display, which replaces traditional instruments such as the speedo, rev counter and fuel gauge, completes the futuristic look. This is similar to the Virtual Cockpit found in high-spec Audis and lets the driver decide exactly what information they want to be displayed directly in front of them, and in what layout.

The I-Pace is 4628mm long, making it fractionally shorter than an Audi Q5 or Porsche Macan, and yet its well-shaped boot can swallow 656 litres of luggage – 102 more than the Audi’s and 156 more than the Porsche’s. This is mostly thanks to the fact that Jaguar hasn’t had to leave room for an engine under the bonnet, so it has been able to position the passenger compartment farther forward.

Practicality is further boosted by a space for the charging cable beneath the boot floor and a small storage area at the front of the car. What’s more, the rear seats lie almost flat when folded down, and the passenger area features a large central storage bin and trays for iPads beneath the rear seats.

There’s enough leg and head room in the I-Pace for four six-footers, even if it can feel a bit claustrophobic in the back due to the way the roof curves downwards towards the sides of the car. However, life is quite uncomfortable for a central rear passenger, because their seat has a harder backrest than the others, while wide sills mean getting in and out of the I-Pace could be easier.

One of the main things that puts people off electric cars is range anxiety – the fear that you might run out of charge before you make it to your destination – so every I-Pace comes with a new EV Navigation system, which is said to factor in the way the car is being driven, the topography of planned routes and insights from previous journeys to help it calculate the remaining range as accurately as possible.

The sat-nav can also sync with a smartphone app that is designed to make it easier to pre-plan journeys that include walking and public transport as well as driving. Meanwhile, another app, called InControl Remote, uses Amazon’s Alexa software to let you ask questions in plain English. For example: “Is my car locked?” or “Do I have enough charge to get to work?”

Another feature of InControl Remote is the ability to warm or cool the battery and interior of the car remotely prior to you getting in, so that the former is at its most efficient from the minute you set off and the latter comfortable enough to stop you shivering or sweating for the first few miles. The energy for this is drawn from the mains when the I-Pace is plugged in so that it doesn’t have to rob from its own batteries.

Jaguar will follow the example of Tesla in offering wireless software updates, reducing the need to visit dealers. And if different drivers have their own key fob, the I-Pace can use this to recognise them, learn their preferences and ensure their usual climate control, infotainment and seat settings are ready every time they get behind the wheel.

At the moment, Jaguar isn’t saying how many I-Paces it expects to sell each year, but it must be fairly confident all this tech will help the car prove popular, because the replacement for today’s XJ saloon will also be exclusively sold with electric power. Together, the two models should help Jaguar take a big bite out of the prestige electric car market.

Sponsors
Rimac has made its new Hypercar ‘Hammond-Proof’
Extreme E puts ‘docu-sport’ on environmental map
Comments
Sponsors
Sponsors
Recent Posts
Categories
We use cookies to ensure that we give you the best experience on our website. If you continue to use this site we will assume that you are happy with it.OkNo