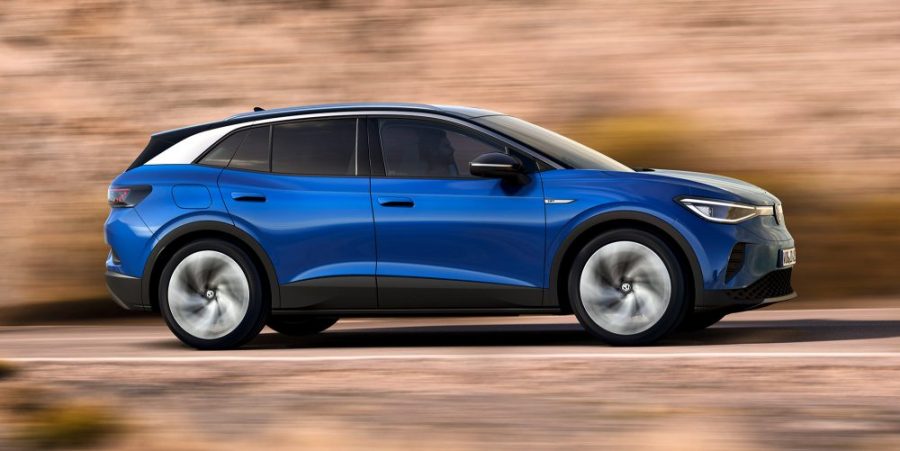 nOn Wednesday, Volkswagen officially unveiled the ID 4, the first electric vehicle built on the automaker’s mass-manufactured modular electric vehicle platform, or “MEB,” to be sold in the US. The ID 4 will also be VW’s first affordable crossover SUV to reach America, with a suggested retail price of just under $40,000.

The ID 4 is one of the many ways VW has had to atone for Dieselgate, the massive emissions cheating scandal made public five years ago. In addition to nearly $35 billion in settlement fees and fines, VW vowed to spend billions more on a whole new lineup of electric vehicles in the hopes of rescuing its damaged reputation. The automaker said it will sell 150,000 electric and plug-in hybrid vehicles by 2020 (hurry up, clock’s ticking!), and over a million battery-electric vehicles by 2025.

The ID 4, which was known as the ID Crozz when it was still in concept form, is the second vehicle in VW’s ID lineup of electric vehicles that will be sold in the US, China, and Europe. The first vehicle, the ID 3, is only sold in Europe. As a global vehicle, the ID 4 is arguably the most important car to be released by VW in years. And it would not be here now were it not for Dieselgate, VW North America CEO Scott Keogh acknowledges.

“I think we’ve probably got [the ID 4] a few years sooner” because of Dieselgate, Keogh said in an interview with The Verge. “To go for a global big hit like this… it definitely came sooner.”

The ID 4 is priced to be a high-volume, mass-market vehicle — a car for “the millions, not the millionaires,” VW says in its advertising. The $40,000 sticker price is slightly more expensive than the average price of a new car purchased in the US of around $36,000. But when you factor in the federal government’s $7,500 tax credit, the ID 4’s sticker price falls to $32,500. And when the ID 4 starts rolling off the assembly line in Chattanooga, Tennessee in 2022, the company says it plans to offer a localized price of “around $35,000” (or $27,500 with the federal tax credit).

With the ID 4, VW will be competing directly with Tesla, whose Model Y compact SUV was just released last year and retails for over $52,000. But VW says it’s really taking aim at a market segment that’s currently dominated by gas-powered vehicles, namely the compact SUV market that includes heavy hitters like the Honda CR-V, Toyota RAV4, and Nissan Rogue. “There is no electric car in this market,” Keogh said.“I THINK WE’VE PROBABLY GOT [THE ID 4] A FEW YEARS SOONER” BECAUSE OF DIESELGATE, KEOGH SAID

There are plenty of affordable EVs for sale today, including the Tesla Model 3, Nissan Leaf, Chevy Bolt, and VW’s own e-Golf. But none of those vehicles are SUVs, the most popular vehicle type in the US. VW says the ID 4 has more potential to accelerate the mass adoption of electric vehicles in the US than any EV released to date — though if that doesn’t work out, the automaker will probably be satisfied with just selling a bunch of them. Currently, EVs make up around 3 percent of total car sales in the US, though that number is expected to rise as prices come down.

Of course, VW isn’t the only automaker to have the idea of releasing an affordable compact electric SUV. Ford, GM, Nissan, and many others are also planning on delivering their own small, battery-powered SUVs over the coming year. But VW thinks it can get its cars in driveways first before this expected wave hits the market, including the Ford Mustang Mach-E, the Nissan Ariya, Volvo XC40 Recharge, and two new versions of the Chevy Bolt. Reservations start online today, with the first customer deliveries expected by the first quarter of 2021.

The version of the ID 4 that will be available at launch will have a 82 kWh battery pack located in the underbody to create a low center of gravity, and an electric motor located in the rear, just like the original Beetle.VW THINKS IT CAN GET ITS CARS IN DRIVEWAYS FIRST BEFORE THIS EXPECTED EV WAVE HITS THE MARKET

Initially, the ID 4’s battery pack, which is comprised of 288 pouch cells in 12 modules, will be produced by South Korea’s LG Chem. But once ID 4 production shifts to Chattanooga, the batteries will be supplied by SK Innovation, another South Korean company that recently opened a $2 billion factory nearby VW’s plant there.

The motor has 201 horsepower and can get 228 pound-feet of torque, which shouldn’t be surprising to anyone familiar with EV motors. VW estimates that the first edition of the ID 4 will have 250 miles of range based on the US Environmental Protection Agency’s standard. (The car hasn’t been EPA tested yet.) An all-wheel-drive variant with 302 horsepower will follow later in 2021.

VW is offering three years of free charging courtesy of its Electrify America EV charging subsidiary. The ID 4 comes with both AC and DC fast-charging capability. The 11kW onboard charger charges at a rate of 33 miles in about one hour, and it charges to full in around seven and a half hours at a home or public Level 2 charger. At a DC fast-charging station, with 125kW charging, the ID 4 can go from 5 to 80 percent charged in about 38 minutes — which is not too shabby.

The exterior of the ID 4 is unremarkable but still manages to elicit a very cool, subdued reaction. When leaked photos of the ID 4 surfaced early in the year, Motor Trend called it “vanilla,” but not in a bad way. The final product retains that inoffensive appearance, which should help attract as many customers as possible. People who want a Tesla will buy a Tesla; the rest will probably be satisfied with the ID 4.

The front of the vehicle is meant to evoke a happy, smiling face rather than the bulging, intimidating front ends common in large SUVs and pickup trucks. “A big trend now is like, ‘How can I make everything look sinister and angry as it comes out,’” Keogh said. “And so we want to get back to Beetle and van days: a nice, wide smiley face. Let’s talk about joy, not anger.”

Getting “back to Beetle and van days” is more than just a toss-off line; it’s a marketing strategy. Ever since Dieselgate, VW has been more overt in its appeal to two important demographic groups: nostalgic baby boomers who want to relive Woodstock and retro-obsessed millennials who are addicted to technology. You can see it in the ID Buzz, the automaker’s electric microbus that’s meant to harken back to Volkswagen’s glory days of peace signs, bell-bottoms, and flower power. And you can see it in the ID 4 as well.

Inside, it’s the same size as VW’s other compact SUV, the Tiguan, despite having an overall smaller footprint. There is ample legroom, but the lighting is where the interior really distinguishes itself.

VW’s ID Light feature (yes, the lighting has a brand name, too) includes a light strip that runs just below the windshield and another through the center of the dashboard. There are also light accents in the door controls and a projection from the outside door handle that shines on the ground.IT REMINDED ME OF KITT FROM ‘KNIGHT RIDER’

But ID Light isn’t just a bunch of pretty colors; it’s an “intuitive lighting” system with different colors and sound prompts to signal to the driver when, for example, the vehicle’s drive system is active and that the car has been unlocked or locked. When I saw the vehicle at a media preview in Brooklyn recently, a red light rolled back and forth under the windshield in a way that reminded me of KITT from Knight Rider.

There are two screens, a 5.3-inch display mounted on the steering column and a 10-inch one in the center console. You can level up to a 12-inch display with the Statement package for $4,500 extra. But it was nice to see a pair of screens that didn’t dominate the interior. So many automakers are going maximalist on the displays (I’m looking at you, Cadillac) in both gas- and electric-powered models, VW’s decision to downplay the screens is almost refreshing.

The infotainment system can be controlled using both gestures — swiping your hand in front of the screen — and voice, using the prompt “Hello ID.” I didn’t get a chance to test either function, but VW says it will help reduce driver distraction.

There are other high-tech features that come when you subscribe to VW’s wireless plan, including wireless phone charging and wireless Apple CarPlay and Android Auto. And VW’s advanced driver assist system, IQ Drive, will come standard with the ID 4. IQ Drive includes automatic emergency braking, blind-spot detection, adaptive cruise control, lane keep assist, and other functions that round out most automakers’ ADAS systems.

VW is crossing its fingers that the rollout of the ID 4 goes smoother than the ID 3, which was marred by software glitches that delayed deliveries to customers. It was a black eye for the project, and one of the reasons why VW CEO Herbert Diess was stripped of his role at the brand in June. (Diess is still leading the larger Volkswagen Group.) Diess was also reportedly removed from the CEO position because of troubles with the launch of the new Golf and other missteps, like a racist ad released earlier this year.

The ID 3 and 4 are just the first offerings of VW’s $66 billion electrification push. Forthcoming vehicles will be based on concept versions of a large SUV (ID Roomzz), a dune buggy (ID Buggy), and a revamped version of its iconic microbus (ID Buzz), for which VW has also promised a delivery variant. All are being built on Volkswagen’s MEB modular electric vehicle platform.

The ID family of vehicles won’t be VW’s first foray into battery-powered drivetrains. VW subsidiary Porsche recently revealed its first all-electric sports car, the Taycan. The E-Tron, the first battery-electric SUV from Volkswagen Group-owned Audi, debuted in 2018. Together, these vehicles represent the tip of the spear in VW’s effort to dominate the emerging EV market.

They’re also crucial in helping VW turn the page on Dieselgate, in which VW was accused of installing illegal software in 11 million diesel cars that would help them pass government emissions tests conducted in a lab, then allow the vehicles to produce higher emissions outside of the lab. The company thought it could get away with the deception, but it got caught. Tens of billions of dollars in fines and settlements later, VW has a unique opportunity to start to make real amends.

Sponsors
Ford is taking a seven-motor, 1,400-hp Mustang Mach-E to NASCAR
Comments
Sponsors
Sponsors
Recent Posts
Categories
We use cookies to ensure that we give you the best experience on our website. If you continue to use this site we will assume that you are happy with it.OkNo